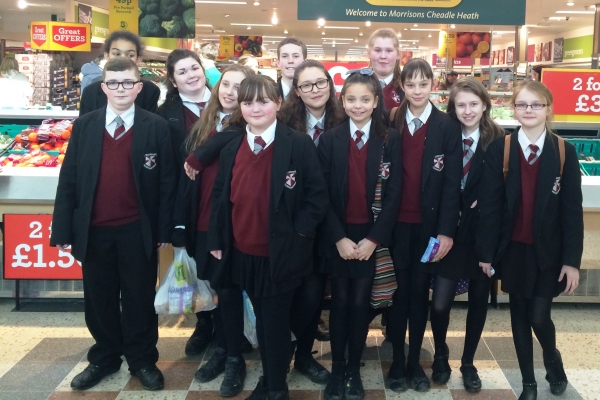 The children from the Green Fingers Club at Saint Paul's High School in Wythenshawe are passionate about developing their new school garden and have been out and about raising money to fund this development.

This week a group of the enthusiastic pupils gave up their Saturday to “bag pack” at a local supermarket to raise money to support the creation of the Gifted Garden and Outdoor Classroom.

Mrs Angie Holland, who organized and supervised the fund raising, said: “The children freely gave up their spare time and were very enthusiastic about helping the shoppers. I was very impressed; they were fantastic ambassadors for Saint Paul’s.”

Mrs Cathie Halbert, who isleading the projectand helped alongside the pupils, said: “The pupils are dedicated to the creation of a beautiful garden which everyone at the school and in the local community can share. They are rightly proud of the work they have done so far and are looking forward to developing the garden further. We have already been impressed by the range of fruit and vegetables which they have grown. We are pleased to see that this is having a positive impact on their food habits and attitudes encouraging more healthy food choices.

We are bonding well as we work together to overcome our fear of creepy crawlies!  I have been really impressed by the way the pupils ‘get stuck in’ to the grubby tasks with as much gusto as the high profile tasks.  The year groups are spreading as we have now have Years 7-10 involved now. It’s a great way for the pupils to mix socially as well as in a work environment.”

“The garden will offer many benefits to the school including hands-on, experiential learning opportunities in a wide array of disciplines such as science, nutrition, maths and the arts,” explained Mrs Fiona Minshall, Head Teacher at Saint Paul’s. “Already, whilst working in the garden, we can see the pupils developing skills such as the communication of knowledge or emotions which will help them be more successful in school.”

The report stated that the school is “enabling students to learn effectively and make good progress. Attainment is rising rapidly as a result. Achievement for all students, including those with special educational needs and/or disabilities and those with English as an additional language, is good.”

More information about Saint Paul’s Catholic High School can be found at www.st-paulshigh.net or contact Jane McAuliffe-Hall (Marketing and Publicity Manager) at This email address is being protected from spambots. You need JavaScript enabled to view it.  or on 0161 499 0000.