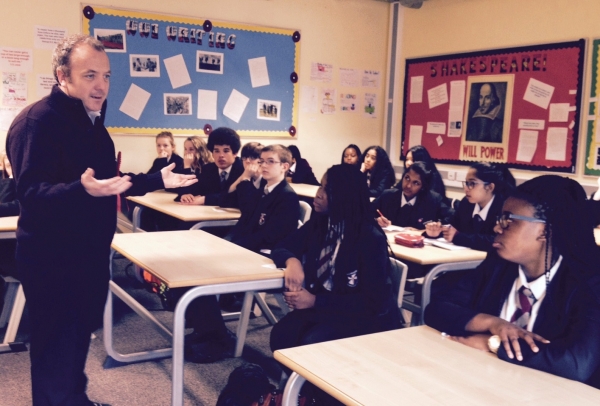 Following an invitation from the School Parliament, local MP Mike Kane visited Saint Paul’s Catholic High School in Wythenshawe where he spoke to a group of Year 9 and Year 10 pupils about his role as an MP.

After talking about his experiences, Mike then opened the floor to questions from the students. As expected from Saint Paul’s, the questions dispelled any lingering myths about political apathy amongst the young. Topics covered a wide range of current affairs with the pupils showing that they have a very lively interest in politics and what is happening in the world.

Ms Una McCaughey from Saint Paul’s said: “The question and answer session was fantastic, it was a heated debate and an amazing experience. Mike Kane said he'd happily take some of our pupils to be part of his future campaigns!”

“The pupils asked some very thought provoking and apt questions; they engaged really well and I was proud of them,” commented Mrs Fiona Minshall, Head Teacher at Saint Paul’s.  “They had obviously given some thought to their questions and I think it’s excellent that they are interested in, and have a passion for, politics and current affairs.”

More information about Saint Paul’s Catholic High School can be found at www.st-paulshigh.net or contact Jane McAuliffe-Hall (Marketing and Publicity Manager) at This email address is being protected from spambots. You need JavaScript enabled to view it.  or on 0161 499 0000.